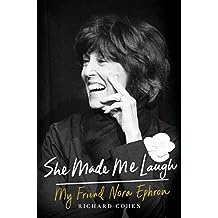 Nora Ephron is almost my contemporary, but the eight year age difference between us is, in fact, a big deal. Born in 1941, she faced a level of sexist chauvinism which was being challenged by the time I graduated from high school and headed out into the world. Ephron’s life is an interesting study in American feminism as it emerged after World War II.

I admit to being only sketchily familiar with her books and movies. I saw “Sleepless in Seattle”.

Richard Cohen, nationally syndicated columnist for the Washington Post, wrote about Ephron because they were best friends. Inadvertently, he provides insight into the New York City world of the rich and famous (and those aspiring to be…) There’s a little too much name dropping, but the affection that underlies the writing is unmistakable.

I think Ephron’s book Heartburn falls into the category of “guilty pleasure” fiction. It’s based on the breakup of her first marriage, which happened at a time when women were often advised to turn a blind eye to spousal infidelity. I can’t help but be disturbed by her fictionalizing her family (especially her children) so extensively. She was, according to Cohen, absolutely confident that she did no harm.

I believe Ephron has been compared to Dorothy Parker (1893-1967) whom Wikipedia describes as “poet, satirist and critic”. I read a biography of Parker and would describe her as brilliant but mean spirited. I think Ephron was equally bright and talented, but far more kind and generous.

If you enjoy biography and/or contemporary gossip, this book is a good read.