Thanks, JM, for selecting French Creek and getting us organized!

I camped at French Creek several times in the past, and I’ve sometimes lauded it as “State Park Heaven”. Yes, it really is THAT GOOD! I first awarded that accolade when my kids were small. Instead of beach swimming, French Creek offers a pool. It’s big and beautifully designed, with lots of shallow water where kids play happily. The pool area is surrounded by grass and then a fence, decreasing the chance of a child wandering off. (Camping with kids poses ALL KINDS of challenges, but is usually worth it.) Because of the pool, those camping trips were the only times I ever brought kids home CLEAN. Wow!

This year we were located on a “pet friendly” campsite loop, which made sense. Some years, our group has included dogs, maxing out at SEVEN one time! As it happened, none this year. Many of the sites near us had electrical hookups, which means (for the uninitiated) that campers could power up their huge, giant RV campers and go wild, enjoying all the comforts of home (air conditioning, sound systems, etc.) We felt out of touch with the surrounding culture, which included a light show projected up into the trees, and, on one site, a four by six foot screen showing NATURE SPECIALS. Like WILD PLANET. No kidding.

A camper always worries a little about noise, especially in the morning. Which will it be – children, dogs, rap music, someone who can’t resist chopping wood? No wood chopping this year, and babies/children not a problem. But the dogs! The first morning we heard only the occasional bark. But the second morning ONE DOG disrupted us repeatedly beginning around 6:30. My husband described it as the William Tell Overture of Barking, and began fantasizing about the Lizzie Borden school of conflict resolution. We restrained ourselves. So did everyone else! The third morning, all was quiet.

I offer the following advice to those who camp with dogs: if you can’t quiet your pet in the early hours, put it in the car and GO AWAY. Drive to the nearest Wawa, buy a coffee and CHILL. Come back after 8 am. Or put your dog on a leash and take a long walk. Be a good neighbor! (Goodness, I once resorted to putting my CHILD in the stroller and taking a 6 am walk…)

So what’s good about French Creek in addition to the pool? There are so many miles of well marked trails. And next door is Hopewell Village National Historic Site, both educational and entertaining.

We were thrilled to learn that the Natural Lands Trust has opened a new area near the French Creek called Crow’s Nest Preserve, with MORE trails and abundant natural wonders. Pennsylvania offers so many opportunities to be outdoors that, even on a peak weekend, you generally don’t feel crowded.

The final benefit is that French Creek is only two hours from home, and the trip takes us against the current of shore traffic. Easy!

My corner of the internet is busy debating the impact of “active shooter” drills and other safety measures on the mental health of children. One author asked if any other generation of American children has known so much fear. Symptoms of anxiety are becoming widespread.

I remember my fear of The Bomb. I was born in 1949. By the time I was in elementary school, the Cold War was in full swing. The arms race was hot. By age 8, I participated in “flash drills”. I was taught to “duck and cover”, but it wasn’t at all clear what that meant. Protect the back of my neck? When the local emergency siren sounded it’s weekly test (noon on Saturday), I flopped down with my face in the grass with my arms protecting my head. I wasn’t frightened.

Things gradually ramped up. I lived near Hartford, Connecticut, and I was told Hartford was probably a nuclear target because of an aircraft factory (Pratt and Whitney). I knew that bombs were delivered by airplanes, so the air traffic in and out of Hartford’s Bradley Field and along the northeast corridor frightened me. Then I was told that the planes that delivered bombs were up so high that we wouldn’t hear them. This didn’t exactly help. I was afraid of invisible radiation.

Things came to a head one day. My mother was cooking dinner using the pressure cooker. (Nothing like having a bomb in your kitchen.) The valve got blocked. Fortunately there was a safety valve, which popped loose. The escaping steam made a loud, horrible, screeching, completely unfamiliar metal-on-metal sound. Assuming we had been bombed, I panicked and headed for the basement at a dead run. My mother intercepted me, explained the problem in the kitchen and helped me settle down. I’m lucky. No one mocked me. I’ve shared this as a funny story from my childhood. But it wasn’t funny.

We lived with fear. My parents, survivors of the Depression and World War II, didn’t tell us everything was going to be okay.

How did I “get over” my fear? I learned denial! Hey, we all use it. If we really thought about all the things that can go wrong in life, none of us would get out of bed. Surely we wouldn’t get into automobiles or airplanes. Not today, we tell ourselves. Not in my town. Not me. I first utilized denial the summer I was eleven. I was going to Girl Scout camp for two weeks. It’s hard to explain how happy and excited I was! And I thought “The Russians won’t drop the bomb while I’m at camp.” So I forgot about it, set it aside, and went off to spend two weeks in a tent. It was great. What’s wrong with denial, if it makes it possible to live with something you can’t change?  I knew perfectly well nothing had actually changed between the US and Russia.

I remember the controversy, when I was in high school, over gory auto accident movies. My high school offered Driver’s Education. Some movies went to extremes – showing decapitation, etc. Some teachers insisted everyone had to watch all the blood and guts. Other teachers allowed some students to be excused. I don’t remember the details. I wonder what is current practice. I do know there’s some educational research that may help those who make these decisions. Does putting a wrecked car in which a young person died in front of the high school reduce that chance of prom night tragedies? I wish I knew.

Here’s another experience I want to share, from the perspective not of a child but of a parent. The threat in question was train safety. Amtrak, understandably, wants to keep people (especially children) OFF THE TRACKS. One of their approaches (early 1990s) was to show a safety movie, and one target captive audience was children in schools near train tracks, most of which are not fenced. (Never mind that NO child in our town crossed a track to walk to school.) My son was traumatized. The movie was very upsetting. As a substitute teacher, I had the opportunity to see the film, and, yes, it was shocking. After some general safety discussion (don’t walk on the tracks, look both ways if you must cross), the film showed two children on the tracks. One has boasted that he will stand on the tracks until the train “almost” hits him. Another child tries to pull him off. With a roar and screaming whistle, the train thunders toward them and the screen goes black. I’ll bet my son wasn’t the only child to get upset.

A school shooting is a different type of threat. Parents and teachers are straining themselves to the utmost figuring out how to help and protect today’s children.

So much to consider… children need to learn train safety, fire safety, pedestrian safety, and now, some things about firearms. Our responsibility as adults is to protect children and, over time, teach them to protect themselves. It’s not easy.

We all experience fear. Parents and educators face incredibly difficult decisions. We need to talk.

On April 30, Riley Howell charged a gunman in a classroom at University of North Carolina/Charlotte. He was shot point blank. His action undoubtedly saved lives. The toll was two deaths and four injured.

The graduation picture released by Howell’s family is heartbreaking. Howell radiates happy energy. He is described as a fearless athlete who loved a challenge.

Why did he charge the shooter? Did he expect to die? We won’t ever know.

In my reading, I encountered someone who might offer insight. Frank Delaney’s book Simple Courage – A True Story of Peril on the Sea describes an incident that happened in 1951 in the north Atlantic. Delaney recounts that when Captain Kurt Carlsen had safely evacuated all crew and passengers off  his disabled bulk cargo ship Flying Enterprise, a young sailor/radio operator jumped from a tug boat to the foundering ship. Why? The risk was extreme. He didn’t know Carlsen. Possibly Carlsen would have survived without him. Together, for two weeks, they struggled to salvage the crippled ship, finally leaving it just before it sank.

I wonder what we could learn, if it was possible to speak to that radio operator. (Not having the book in my hand, I don’t know what he said, if anything.) If he is living, he would be at least 90 years old. My review of Simple Courage can be found in this blog dated April 22, 2014. (Interestingly, Amazon’s web site includes a review of Simple Courage by Senator John McCain, who found the book “absorbing, thrilling and inspirational…”)

Howell’s loved ones can frame this however they choose, remember him as a hero or regret his split second decision or both. Their lives will never be the same. My heart aches for them.

Before I could even post this, another tragic death has occurred, of a high school student in Colorado, in similar circumstances. 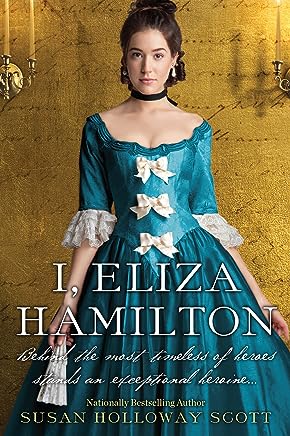 I feel like I’m sneaking up on Alexander Hamilton.

I tried to read Ron Chernow’s biography Alexander Hamilton (2005) but got bogged down. I may return to it. I “accidentally” listened to The Glorious Cause: The American Revolution, 1763-178” (2007) by Robert Middlekauf, part of the Oxford History of the United States. (On a long family road trip, the driver gets to choose the recorded book, and even when interested, I sometimes doze off.) I haven’t watched the musical Hamilton, or even heard the sound track.

I accepted I, Eliza Hamilton from an historical fiction enthusiast. Conflict of interest right there…  I ask the usual question…why fictionalize an interesting and fairly well documented life? I guess some people just HAVE to have dialogue! And they can’t accept that there are questions that can’t be answered. Did Hamilton marry for money and social status?

My opinion about Scott’s book? So so. Romanticized. Sentimental. But I kept reading. Call it a C+/B-.

What I really want to understand about Hamilton (and American society at that time) was the role of dueling. Scott (in her discussion notes) says Hamilton was involved in ELEVEN duels or threatened duels. She is the first author I have read to raise the possibility that duelists did not always shoot to kill. (Their weapons were of poor quality and most were bad shots.) What was the nature of the “honor” being defended in these encounters? If, as I have read elsewhere, dueling (which was illegal or severely frowned upon) was an alternate dispute resolution system, did this reflect a flaw in the laws and courts that might better have handled the disputes? What kept dueling from spiraling down into blood feud?