I discovered Nan Shepherd when a friend passed along a poem of hers, dated 1934 and entitled “Summit of Corrie Etchachan”. Fortunately my friend provided some context – a “corrie” is what we call a cirque, a glacial erosion feature in mountain terrain, a “steep-sided hollow…on a mountainside…” (Google Dictionary). The poem is written in that demanding form, the sonnet. The poet compares the corrie to the human mind. One reviewer refers to Shepherd’s writing as being “geo-poetic”.

Curious about Nan Shepherd, we promptly found her in Wikipedia, learned about her books, and downloaded The Living Mountain on Kindle.

Shepherd, categorized as a “Scottish Modernist”, published three novels between 1928 and 1933, but The Living Mountain was rejected and finally saw print in 1977, six years before Shepherd died. A biography by Charlotte Peacock was published in 2018.

The Living Mountain is nature writing at its best, a series of sketches describing the landscape Shepherd loved so well and her reflections (both scientific and emotional) on what she experienced. She hiked in all seasons and weathers, accepting the risks of rough terrain and changeable weather. She loved solitude and silence.

The Living Mountain reminded me of The Outermost House by Henry Beston, published in 1928 and situated on Cape Cod. Like Shepherd, Beston emphasizes the physical aspects of nature (wind, water, light) as well as living organisms.

The Living Mountain is a classic and will be enjoyed by many.

Why start on Book 3 of a series? The regrettable limitations of my (usually sufficient) county library! I was curious about Lovett, but not curious enough for a purchase. I’m trying not to buy books.

I didn’t completely read this book, checking the beginning and the end and a bit here and there. Conclusion? I’m not going to read it now. (Not what I need, in my jangled, vaguely fragile, Covid transitional state of mind.) But if I was waiting around in a train station, I’d grab Book 1 of this series (Dangerous Attachments) for sure. Female author, interesting and brainy female protagonist, and set in New Mexico! What more could I ask for!?

I discovered Janet Lembke when her book River Time (1989) turned up on a relative’s coffee table. I read several more of her books after that, especially enjoying Dangerous Birds (1992) and Despicable Species (1999). Recently, Looking for Eagles turned up on my guest room bookshelf. Very appropriate, as I’ve sighted more eagles in the past four weeks than the previous four years.

I’m assuming we can agree on the definition of a naturalist, and to be clear, Lembke is the kind of naturalist who is outside much of the time, wandering in the woods, getting bug bitten and muddy, and sometimes fishing or gardening, but mostly just looking at everything.

In understanding ecology, Lembke depends on the usual academic fields (ornithology, entomology, etc.) but also searches classical mythology to find out what the Greeks and Roman thought about the creatures and ecosystems they observed. (They often got things wrong.) She examines scientific nomenclature, which relies heavily but not exclusively on the Greek and Latin languages.

The result is a book full of interesting observations and comments. I especially like her chapter “The Wind-Egg”, about birds and their eggs and nests. I’ll spend more time looking for nests this Spring. The river in  River Time and the location of Looking for Eagles is the Neuse River in the North Carolina coastal plain. The river and its surroundings are threatened by sea level rise and increasing storm activity.

Lembke’s literary output was broad ranging. She produced several important translations from classical Greek and more than a dozen works of non-fiction, including a (soup) cookbook in 2001. I’m particularly curious about The Quality of Life: Living Well, Dying Well (2004) and her last book Chickens: Their Natural and Unnatural Histories (2012).

I really wish Lembke had lived to finish her memoir, I Married an Arsonist.

As climate change presses itself on us more and more intrusively, the reflections of naturalists increase in importance. I recommend Janet Lembke’s books to everyone concerned about the impact of climate change on ecosystems.

Sounds bad, doesn’t it? But it wasn’t. It was (I think) ahead of its time, and taught me important things.

I can’t remember when SWCA emerged. Possibly it was just after Dr. Martin Luther King, Jr., was murdered in 1968.

I had radical friends, members of SDS (Students for a Democratic Society). One of them told me they were forming a new organization, Students for White Community Action, to deal with the fact that racism in America is fundamentally a WHITE problem. This was contrary to my assumptions. I thought that Black Americans were poor and uneducated, and needed (white) teachers and social workers to help them rise to “mainstream” social and economic status. My radical buddies enlightened me about the Black professional class, cultural values and (to some extent) the accomplishments of Black Americans.

I don’t know what happened to SWCA. Perhaps a few meetings were held? I was struggling to keep up in my chosen academic major (chemistry) and didn’t indulge in much outside of studying.

Why was my viewpoint on race so limited? I grew up in a defacto segregated suburb of Hartford, Connecticut. The “North End” of Hartford, home to its African American population, was perhaps five miles from my house, but it might as well have been on the far side of the moon. By the time I was a senior in high school, a tiny bit of communication had been established by teachers and church leaders. One friend of mine went to the North End weekly, to tutor. Eventually, we had one “cultural exchange” – choir concerts! We were bused into the North End and performed at a high school, which reciprocated.

Michigan State University was almost as white as my hometown, but the winds of change were blowing at gale force. Possibly the Civil Rights movement in the South could have been ignored, but the “long hot summer” of 1967 culminated in the terrible 5-day Detroit Riot which left 43 dead, 1,189 injured, 7,200 arrested and 2,000 buildings destroyed (Wikipedia).This took place one hour’s drive from the campus I entered in September of 1967. MSU had been used as a staging area for the military assault on Detroit. The University was not, that season, a stable institution. No wonder I remember my college years as “turbulent”.

More than 50 years have passed since then. I’m still learning… 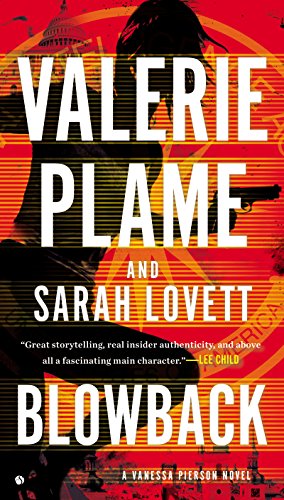 This book, published in 2013, is in the “thriller” genre, according to one of the reviews on the back cover. (I thought it might be a “spy novel” or an “action thriller”.)

Blowback is also thinly disguised autobiography. I’m curious about its publication history. Maybe the CIA attempted to block it. Didn’t find any information at first glance.

Heroine Vanessa Pierson is a driven CIA employee working in deep cover, the kind who can expect NO help from the US government if things go wrong. Which they do, regularly. Our heroine is an over-the-top adrenaline junkie.

Blowback moves at breakneck speed. The writing is crisp and vivid. If you want to be distracted, it’s just right.

I particularly admired a plot twist near the end, that cranked up my interest.

A book with two authors always makes me wonder, so of course I’m curious who wrote how much. I’ll check out Sarah Lovett and see what I think. Maybe she wrote it all!

Blowback managed to have both a satisfying resolution and the set-up for sequel called Burned. I’ll read Burned (also by Plame and Lovett) if the Library has it.

PS: Yes, I found Burned. The same high energy and fast pace as Blowback. The ending is plainly written to permit a sequel, major cliffhanger stuff, but no sequel has appeared. I wonder which author decided to end the collaboration? Maybe Lovett prefers to continue writing about New Mexico, the setting of her novels featuring forensic psychologist Dr. Sylvia Strange I wish the best to these two very dynamic authors! I’m not always in the mood to read thrillers, but when I am, I’ll know where to turn.