For me, the name “Los Alamos” triggers a cold shiver. This remote New Mexico location (it wasn’t a town) is where the World War II Manhattan Project was moved in order to build the first atomic bombs.

Who were these wives? They were married to scientists and engineers, often academics, hence enjoyed middle class or higher socioeconomic status. Many were young. They were told almost nothing about Los Alamos in advance. The ultimate answer to any question was “the war”. You are doing this for the war effort. Someone, somewhere, decided that, if a few hundred scientists were going to isolated for months or years, they needed some semblance of normal family life. But once the work was underway, the scientists labored behind locked gates ten or more hours per day, and could not speak a word about their activities to their wives and children.

Nesbit has not written a conventional narrative, using a looser approach which offers several versions of every situation. No one woman is followed through the three year period covered by the book.

For example, Nesbitt writes about the (often hasty) marriages that preceded the deployment to Los Alamos (p. 37):

Our brothers said we looked like movie stars, like angels, like ourselves, like ourselves but prettier, like our mothers. Or our brothers were late to our weddings because they were taking the office candidate exam. Or our brothers were not there to see us wed – they were in a bunker in Europe, they were at Army gunnery school. They were Navy bombers, and on our wedding day the newspaper reported: A Navy patrol plane with ten men aboard has been unreported since it took off on a routine training flight Friday and it is presumed lost in the Gulf, and we did not hear from our brothers on our wedding day, or the next week, or the next.

Using this approach, no experience is offered as “definitive”.

I knew a little bit about Los Alamos because my dear friends Libby and Charlie Marsh were among the residents. Charlie was a physicist. (He saw the scientists as being distinct from the engineers on the Project.) I don’t believe he was drafted. Scientists were brought into the military through other pipelines. I wish I had asked Libby and Charlie more questions. Both are deceased.

Nesbitt’s accounts of the experimental Trinity test (first nuclear explosion) and the subsequent bombings of Hiroshima and Nagasaki are particularly intense.

How could we not have known? How could we not have fully known? In retrospect, there were maybe more hints than we cared to let ourselves consider: back in Chicago, our husband’s colleague told us, Don’t be afraid of becoming a widow; if your husband blows up, you will, too…Did we turn away from the clues because our questions would be met with silence? Or because in some deep way, we did not want to know?

Or perhaps we knew this might happen all along, but we never wanted to admit it.

I highly recommend this book. Understanding the experiences of my parents’ generation isn’t easy, but it’s worth the effort.

Another trip to Trenton. (See my posts of  February 12 and 21 of 2019.) On March 25, both the New Jersey Senate and Assembly voted on a bill to allow a doctor to prescribe lethal medication for self administration by a mentally competent adult having (in the opinion of two doctors) less than six months to live. Polls show that 60% of New Jersey residents want this change in our law.

How did I spend my day? I was one of perhaps 25 supporters working under the banner of a national organization called Compassion and Choices. We made our presence obvious by wearing the organization’s distinctive yellow t-shirts. Some of us carried signs.

Opponents to the legislation wore recognizable lapel badges. Who are they? (I can’t answer this in detail.) I think they are people who believe that medical science can control pain. Some are doctors. Some seem to be religiously/morally motivated – Catholics and (orthodox?) Jews. Most poignant, some are citizens with handicaps who fear that Aid in Dying will lead to involuntary euthanasia of people judged to be “defective”. It seems to me that this “slippery slope” argument requires very careful analysis, and the concerns of the handicapped must be scrupulously protected. In this territory, the public policy making is far from complete.

Initially we lurked in the crowded basement of the New Jersey State House Annex, wanting our support to be visible to the legislators. The noise and crowding were extreme. Sometimes the two sides of the Aid in Dying issue came face to face. I was walking up a ramp, supporting a lady much older and more frail than I am, both of us moving carefully. We came face to face with an opponent to our position, a huge man dressed in black whose argument consisted of “how can you possibly?…” and “every soul is sacred”. I slowed him slightly with “what about my right to make the decision to end my own pain?” or something like that. Then I handed him my one page statement (see previous post) and asked that he read it. The crowd pushed us apart.

Much was under consideration in Trenton on March 25…

We waited – in the corridor, the cafeteria, the two legislative chambers…

Compassion and Choices warned us that, in the legislative chambers, we would hear distressing statements, exaggerations, untruths… We were asked to stay calm and refrain from calling out (which violates the rules), although opponents might do so. Yes, all of that happened. It was hard. Procedural issues came up – we thought the Bill was tabled, which would have been bad, but suddenly it was back. Only one assembly person spoke with what I would call the “voice of reason”. I think almost all legislators were committed beforehand. And a few were waging a passionate battle in opposition.

After the vote, most of “the opposition” drifted away from us, but a young man took out his cell phone and announced that he wanted “pictures of the Nazis”. That’s what he called us. We tried to ignore him and shelter the woman he approached most closely, a fragile cancer patient. Somehow we all got out of there.

Looking at the smiles and high fives exchanged after the legislation passed first the Assembly and then the Senate, and at the pictures posted on social media, an observer think the pro-Aid in Dying group was happy about its victory. But underneath this was very profound sadness. Most of the supporters of Aid in Dying (based on my experience) are women who are or have been caregivers. In formal testimony, there were repeated references to “my husband”, “my mother”, “my sister”, “my best friend”. Most (but not all) of these loved ones suffered from cancer and experienced terrible pain. A few people were advocating on their own behalf, in anticipation of uncontrollable pain. Four (possibly more) members of our group are plainly seriously ill – three using oxygen, one in a wheel chair. They were among the more emotional of the participants. I talked with a composed and apparently healthy woman suffering from a rare genetic liver disorder. There is no treatment available. She is fortunate to even have a diagnosis. Her quality of life may deteriorate at any time. If that happens, she wants to choose the time of her own death.

I was relieved when the Governor signed the Bill into law. A few months will be required to set up regulations for implementation. How soon will this be an issue which is about ME? Or some dear friend? God grant me wisdom… 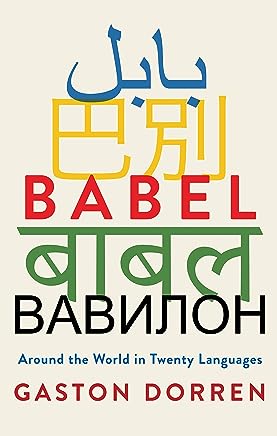 This book is so good I started to write about it when I was only halfway through! I’m not great about taking notes when reading for pleasure, and I didn’t want to forget some of the things that have made this book so much fun.

Gaston Dorren is not a native speaker of English. He lists Limburgish, the Dutch dialect of a province in Netherlands, as his first language. I remember that when I spent a summer in Netherlands, a friend described himself as a speaker of Sittardish, a dialect limited to a single city. For him, Dutch was a slightly formal language, studied in high school and used at the University and at work. Scientists, it seemed, spoke as much English as Dutch. I ended my months in the Netherlands with great affection for the people and their culture, and a tiny knowledge of (standard) Dutch.

In Babel, Dorren writes about twenty languages, use of which accounts for about fifty percent of the human population.  He starts by admitting there’s no way to count languages. How do you decide what is a dialect? We know (and regret) that languages have been lost. See my discussion of the indigenous western hemisphere language Potawatami, dated March 6, 2019.

But what else is going on? It is the nature of language to CHANGE! After all, this is a “blog”, a version of “social media”. Wouldn’t have made sense 20 years ago…

What I like best about this book is that, having chosen his twenty “big” languages, Dorren then discusses whatever interests him about each language – geography, politics, history, sociology, sounds, grammar…

He begins with Vietnamese, which has very few “second language” speakers. In other words, very few people study it. Despite his linguistic training, Dorren finds Vietnamese excruciatingly difficult!

Only one African language makes it into this book – Swahili. Dorren describes the African attitude towards language as very different from elsewhere. French, (British) English and (Mandarin) Chinese (to name a few) are very clearly defined by official bodies, and VERY resistant to change. Correct speech is valued. Not necessarily so in Africa! Almost anything goes! Most people speak several languages – mother tongue, a local language for school, maybe another for high school, a regional language, plus Swahili and/or a “world language”. Dorren describes Africans “storming the language barrier”, cheerfully using any common speech they can find, gesturing, shouting… Correctness falls aside.

This is a great book to broaden your horizons. But beware… the urge to travel may overcome you. The only problem will be choosing a destination. Bon voyage!