This book was loaned to me by a friend, who asked for my opinion of it. Sometimes this means my “scientific” opinion, since I am a scientist. I earned a Master of Science in Chemistry in 1973.

My academic degree is no particular help in evaluating this book, but I have relevant informal experience. I’m married to an ecologist well versed in evolution, who taught an undergraduate course called “Animal and Human”. That course focused on the research of Jane Goodall and other primatologists. Our home bookshelf includes works by Goodall, Frans de Waal and others. I particularly like de Waal’s Good Natured – the origins of right and wrong in humans and other animals.

Back to the book… Eva is a 13 year old girl who suffers devastating physical injuries in an auto accident. Her (less damaged) brain is transplanted into the body of a young female chimpanzee. (No, I don’t think will happen in my lifetime, despite rapid advances in neuroscience.) Against all odds, Eva survives, the first (and only) member of a new life form. Everything about Eva is novel and much is unexpected – to her, her family and the doctors and scientists who made her treatment possible.

Eva turns out to be more chimpanzee than human. She feels more at home in a chimpanzee colony called “the pool” than with her parents or school friends. Their habitat destroyed by human overpopulation, all surviving chimps live in “the pool”, a zoo-like urban setting where chimps face one of three fates. Some are sold to corporations or universities for research. Others are kept in a zoo, for the (paying) public to see and appreciate them. The luckiest ones live mostly undisturbed in a private compound, observed (remotely) by scientists who want to understand their biology and behavior. Even that is not a “good” or “natural” life for a chimpanzee, and they have lost skills, including the ability to forage for food. Eva, the daughter of one of the scientists, played with chimps as a child and felt positive towards them. This helps her survive the shock of “waking up” in a chimpanzee body.

Eva wants a more natural setting for herself and the other chimps, and, against the odds and at great risk, she gets it. A chimp colony is established (in Madagascar). Eva attempts re-teach chimps “wild” life skills and to import a few human behaviors into the colony (tying knots, for example). She breeds only with chimps she considers intelligent and socially cooperative. She dies (of old age) hoping “her” chimp descendants will thrive in the future at a time when humans seem doomed.

My opinion? Highly entertaining. Dystopian fiction, however, is not a genre I like. It can be cynical and broadly antisocial (imho). Is Eva anti-science? Borderline. If you’re looking for “bad” scientists, you can find them. I don’t consider this a trivial issue. Not while climate change deniers and anti-vaxxers show up in my own community. If we reject science across the board, we humans are doomed, and may destroy other species as well.

This book was published in 1989.  Peter Dickinson died in 2015. It is categorized as Young Adult fiction. Dickinson doesn’t talk down to his readers. If anything marks it as YA oriented, it’s the emphasis on plot (over character, setting or reflection) and the brisk pace. One category of YA is “dystopian YA fiction”. Eva might qualify. The future world depicted is overcrowded, polluted and gloomy.

If someone wants to critique the portrayal of chimps in Eva, I suggest they check the publication dates of the books mentioned above to see what information was available to Dickenson when he wrote Eva. I think, overall, that he did a good job.

Jane Goodall wrote Reason for Hope in 1999. She is now 87 years old. You can check her out at www.news.janegoodall.org. She still has hope.

I found this book by accident, during my first post-Covid IRL visit to my local library! HOW did I miss it before? Run was Patchett’s second novel (2007), after the wonderful Bel Canto (2005).

Run was ahead of its time in its consideration of race. The book triggered my curiosity about transracial adoption.

The plot: A prominent white urban politician (and his wife) adopt two black children to “complete” their family after infertility thwarts their desire for a second child. The wife dies, and the father is left to raise a ten year old son and two preschoolers. Almost two decades later, the father learns that the birth mother of his two younger boys has “stalked” his family persistently. Perhaps this revelation had been inevitable. Everyone has to rethink his/her identity and role. A girl, the younger half-sister of the adopted boys, emerges as a major character.

All these characters are strongly drawn and believable. The oldest son, Sullivan, is particularly interesting, reminding me slightly of Marilynne Robinson’s “prodigal” son Jack Boughton in the Gilead series, another story in which race is examined.

I can’t think of any other novel with a one word-three letter name. “Run” has so many meanings. A politician “runs” for office. A manager “runs” an office. I “run” to catch a train. Life, in many ways, is an endurance run. Patchett’s characters are all struggling to do their best with what life throws at them.

I’m glad that there are several more books by Patchett for me to read.

This book was recommended to me by my comedian son, who lives in Chicago, home of the Second City Comedy troupe and, for a time, Harold Ramis and family.

But the real “hook” for me was Ghostbusters! The movie was released in 1984, the same year my older son was born. A huge hit! Wildly funny. Lots of ancillary products, like T-shirts. I can’t remember at what age we first took Ben to see it. It totally captured his imagination, and became his first “commercialized” passion. Our best purchase was Ghostbuster coveralls, with “Who You Gonna Call?” on the back. Both boys wore them. I’d have bought a pair for myself, if I saw them in my size.

Phrases from the movie worked their way into our daily conversation and have remained to this day. The best were “Back off, man, I’m a scientist!” and Ramis/Egon’s great deadpan line “I collect spores, molds and fungus”. We still refer to any deteriorated property as “a unique fixer upper opportunity” and remind each other “everybody has three mortgages”. “You really eat this stuff?”

So I have to tell you I was hoping for more details about Ghostbusters, which the book did not provide. The book moves sequentially through Steil’s life. I hadn’t known how many films Ramis was involved with as actor, writer, director and/or producer. Steil visited the sets of most of the movies, but her reminisces weren’t particular enlightening.

The personal chapters were more interesting. Violet Ramis Steil is a lively and perceptive writer. This wasn’t my first entertainment world autobiography. Bottom line, I don’t know how the children of celebrities survive! They are exposed to drugs and crazy adult behavior, and sometimes forced to grow up fast because their parents are irresponsible. Harold Ramis had his wilder moments, but settled down in his second marriage. He became wealthy and was generous towards his daughter and many other people.

Stiel’s discussion of her education and career choice was interesting. She knew she did not want to join the entertainment world. She wanted to help people, and went to graduate school to study social work, specializing in maternal and child health and welfare. Approving wholeheartedly, Ramis subsidized her so that she could live in Manhattan on a social worker’s salary.

The chapters about Ramis’s death are terribly painful. In 2010, he developed diverticulitis, followed by infection and a brain damaging stroke. Thinking he might recover and return to the work he loved, his wife limited the information that was shared outside the family. Four years of terrible struggle followed. Ramis experienced painful and repeated complications, seizures, treatments, and rehabilitation. No one should suffer that way.

I can’t find out what Violet R Stiel has been doing since her book was published in 2018. After the reviews, she’s been relatively invisible – not in Wikipedia, minimally present on Facebook. (Maybe I just don’t know where to look.) I hope she’s writing. Maybe she’ll provide commentary on the pandemic! 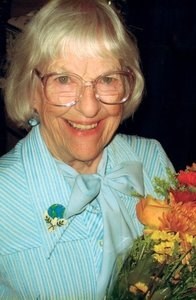 When I last wrote about Peace Pilgrim (May 15, 2017), it was in recognition of her election to the NJ Hall of Fame.

The (largely unrecognized) subtext to the Peace Pilgrim story is the vital role of her younger sister, Helene Young. Peace Pilgrim (Mildred) took to the road and (unintentionally) achieved considerable recognition. Helene stayed home, providing a private, safe haven for Peace Pilgrim, handling her correspondence and (with help from her husband Eugene Young) carefully documenting her sister’s extensive travel and heartfelt message of inner peace.

Peace Pilgrim died in 1981 at age 72. Helene lived to be 105, 32 years older! Those years brought challenges and many losses. After Peace Pilgrim’s shocking death in 1981, Helene lost her beloved husband Eugene, her daughter Jeanne Fisher, and I don’t know how many other family members and friends.

It was my very good fortune to know Helene during her last quarter century. She loved music. We attended concerts at Stockton University. I took her to see a Stockton performance of Messiah at a casino in Atlantic City. The walk from the parking ramp to the auditorium was ridiculously long – across a “sky walk” from the garage, through long corridors and across the casino floor. The “average” 90+ year old might have faltered, but not Helene.

Helene came to parties at my house, once sitting down at the piano and playing exuberantly. I went to a “Friends of Peace Pilgrim” potluck at her home, with a funny consequence. I had cooked a vegetarian casserole which included nuts, seeds and raisins… very popular! I left the excess behind for Helene. Unfortunately, returning to my kitchen, I realized that one ingredient had been infested with meal moths, including their ugly little worm-like larvae! Ack! Completely harmless, but gross… I felt duty bound to tell Helene. “Throw out the leftovers! So sorry!” She took the news with total calm. We discussed her problems with keeping a clean kitchen when legally blind, and her worries that she might once have put moldy bird food into her feeders. A conversation unique in my experience!

I shared Helene’s enjoyment of bicycling. She went out in colder weather than I could tolerate. I would encounter her at the cemetery where her sister was buried, and in Cologne. Eventually, she was so blind she couldn’t recognize me across the street, but she saw well enough, with her gaze on the shoulder, to pedal around the familiar streets safely.

During one of my last visits, in the midst of a discussion of our common German heritage, we burst into song! “Du, du, liebst mir im Hertzen…” Old German “oompah” music, possibly a drinking song. Helene loved to talk about her childhood in Egg Harbor City. I think she spoke German before she entered school.

Covid struck when Helene was 104, so our relationship was reduced to phone calls.

Helene’s interest in books, people and events did not wane. In September of 2020, she told me she wanted to live to see Donald Trump out of the White House and the Covid pandemic defeated. I regret that she witnessed the terrible events of January 6, 2021. She spent her last months carefully quarantined by her loving family and died quietly of old age (not Covid) on January 14, 2021. Rest in peace, Helene!

PS: Recently, I’ve been party to discussions about death. Americans “don’t like to talk about death” and use a variety of euphemisms for the word. During her last three years (at least), Helene looked death in the eye, calmly. She discussed death freely, especially after she got hurt and was unable to continue her bicycle outings. She bought a dress to be buried in. She spoke of death as “turning up my toes”.