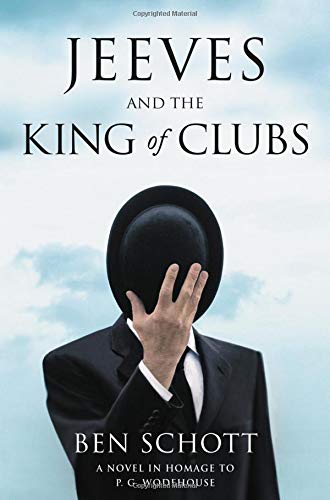 This “new arrivals shelf” book has a subtitle. I usually dislike subtitles, but this one actually conveys useful information! “A Novel in Homage to PG Wodehouse”. Irresistible! I’ve read Wodehouse and watched any number of the humorous video adaptations shown on the BBC. Jeeves and the King of Clubs was so much fun to read. Schott’s website informed me that Jeeves was authorized by the Wodehouse estate.

Sometimes the language is a bit “cute”, and there’s anachronism here and there (“flash mob”? really?), but a good dose of Wooster and Jeeves was just what I needed this week. Highly recommended when you crave escape fiction and don’t want to stumble onto angst or gratuitous violence.

I looked up Ben Schott. Jeeves is his first novel, released in late 2018. His previous, non-fiction works were lists, an “almanac” and a “miscellany”. In 2013, he published Schottenfreude: German Words for the Human Condition. I want it! Please keep writing, Ben Schott!

I went to Trenton on February 7, 2019, to support legislation that would, under certain conditions, permit a doctor to prescribe lethal medication for self administration by a mentally competent adult. Knowing testimony would be limited to two minutes, I wrote the following:

I am testifying in support of this legislation because of my experience at the bedsides of two dear friends, Carol Slocum who died of pancreatic cancer in 2010 and Mary Hunt who died of lung cancer in 2014. I regret to say that each of them suffered from severe pain.

What I saw led me to conclude that pain control is not an exact science and that the promise offered by hospice of a calm and painless death is an illusion. Medications and supportive services help some people, some of the time. High dose morphine controls pain at the expense of meaningful awareness. Drugged oblivion would not be my choice.

Mary Hunt wanted medical aid in dying and repeatedly expressed to me her anger and frustration that the laws of the State of New Jersey prevented her from having meaningful control over her impending, inevitable death.

I am currently blessed with good health, but I know how quickly that can be swept away. If I am ever as sick as my two friends were, I want the right to end my suffering. I would want to have a legally prescribed, lethal drug in my possession. I consider Aid in Dying for the Terminally Ill to be a compassionate and humane policy.

Alone in my car on the way to Trenton, the memory of other deaths intruded into my consciousness. FOUR MORE cancer deaths in the past decade, among my closest friends. Cancer of the lung, breast, uterus, ovaries. (Dozens, of course, if I draw a wider circle.)

It’s a wonder I even got to Trenton. I wanted to pull off the road and cry.

Among these six personally devastating deaths, what did I see? ONE case that I would characterize as a “good death”, the kind hospice hopes to provide – safety, comfort and loving company. Another was about 50% “good”. The others? All kinds of problems.

MY SIX FRIENDS WERE MIDDLE/UPPER CLASS PEOPLE WITH GOOD HEALTH INSURANCE. Their families were reasonably sophisticated about hospitals and medical specialists.

I simply can’t imagine what it’s like for people with no insurance. Or no money. Or few friends. Or poor English.

I’m concerned about the emphasis on PAIN as a criterion for aid in dying. How much do I have to suffer for YOU (who oppose this legislation, and/or the State of New Jersey) to be comfortable with my decision to die?

What about my right to make the important decisions about my life? At what point should it be taken from me? Medically, our ability to keep people alive far outstrips our ability (and willingness) to support QUALITY of life.

This isn’t my first such critique! Much lip service is paid to democracy, and we are all enjoined to be active citizens. Public hearings should be a constructive opportunity to influence policy, but too often they are regrettably mismanaged.

I’m pleased to report this hearing, which dealt with the difficult topic of medical aid in dying, was well organized. It began almost on time. The committee members made only brief introductory remarks.

All citizens and organizations that wished to be heard were required to sign up in advance. In some ways, I didn’t like the fact that a citizen was required to indicate “pro” or “con” at that stage, but the committee plainly intended to balance the remarks.

Speakers were seated at a table for four, facing the committee of seven members. The chairman

Initially, four speakers were called in support of the proposed legislation. Then four opponents. Most of the early speakers were affiliated with organizations, generally as officers. They continued to alternate “pro” and “con” until a total of 24 speakers were heard. In three cases, committee members had questions for speakers, but these were brief. In one case, the issue was interpretation of data.

Next, the names and stances of all others who had requested to speak were read into the record. I don’t feel strongly about the fact that I was not called to testify. Other people defended my point of view.

The committee voted. I don’t think the outcome was a surprise. The committee approved the legislation to be sent to the State Senate and Assembly for vote.

I approve of the way the committee handled this hearing. My time was not wasted.

I regret to report that Trenton still looks and feels like a DMZ.

I haven’t told you my position. Stay tuned. It’s too important and too complicated for a quick review.

I’m glad that I chanced upon Book 1 of this series, which now includes ten novels. Flavia de Luce is a delightful young heroine. Her absent minded and distracted family ignore the fact that Flavia has a passion for chemistry and, particularly, for chemical poisons. Their house is big enough that her laboratory is delightfully private. When a stranger is murdered in the garden, Flavia’s curiosity and scientific knowledge lead her to investigate.

Unexpectedly, she learns that her widowed father carries a burden of guilt and regret that almost shatters his life.

I appreciate the fact that Bradley writes about someone who loves chemistry and ISN’T a hopeless weirdo! I studied chemistry, and understand the appeal of things that sizzle and change color. I wish I’d had more chances to fool around in a laboratory like Flavia’s!

I plan to download the next novel in the series for my upcoming train trip. Just right!

This book reminded me of The Guernsey Literary and Potato Peel Pie Society by Shaffer and Barrows, published in 2009. Each novel consists of a series of letters, diary entries and notices. Ryan’s novel seemed less “spontaneous” than Guernsey. Would anyone really write such wildly uninhibited letters?? But both novels, each dealing with British civilian life during World War II, make good reading.

The church choir in the village of Chilbury is deactivated when too few men are left in town to sing tenor and bass. The Ladies Choir’ takes its place, at first tentatively and then with vigor. Chilbury is located next to a city named Litchfield Park, possibly meant to resemble Bletchley Park, where Britain’s crucially important code breakers were headquartered.

Yes, there’s a spy among the characters. He turns out NOT to be a villain. Ryan creates interesting villains. One is predictable, a military man (a brigadier) who bullies his family and neighbors. But another is a midwife! (See my blog entry of May 24, 2018 about midwives in fiction.) The brigadier and the midwife enter into a nefarious scheme to insure a male heir for the brigadier. Other plots unfold. Many important characters are children and adolescents. Ryan depicts the impact of war on their young lives very realistically.

Ryan’s plotting is uninhibited – she throws in complications fast and furious. I couldn’t stop reading! One of my favorite characters was Kitty, the third child of the brigadier. At 13, she’s full of energy and curiosity, headlong and rambunctious and confused by the War and it’s impacts. She reaches out to other children and also to adults as she struggles to cope. There are enough interesting characters in this book to make me hope for a sequel. After all, the Battle of Britain has barely started!

What’s this got to do with Shakespeare’s romantic comedy, “Twelfth Night”? I attended a discussion of the play recently. Remember the identical twins, Viola and Sebastian, who are separated after a shipwreck? Viola disguises herself as a man, and is mistaken for her brother, who she fears is dead. Love at first sight strikes several characters, and giddy confusions ensues. Our discussion leader pointed out that “Twelfth Night” has a subtitle, namely “What You Will”. Our starting discussion question was “Is love something you WILL, or is it something that happens to you?” Great question! We talked for over an hour. Do you choose to love? Does reason play any role in love? No, we didn’t reach a conclusion.

In The Chilbury Ladies Choir, Jennifer Ryan depicts characters to whom love “happened”. They weren’t “looking for love”, but were taken by surprise. There are two couples, one young but sophisticated, the other older and burdened with sorrows. For each of these four people, love is a dangerous path.

The person who recommended this book to me said it was about music. This aspect was handled lightly and deftly, with occasional references to hymns and choral performances. Two other themes are change and leadership.

This book rises well above the “chick lit” or “beach reading” category. I’d classify it as high quality historical fiction. The echoes of World War I are important. Read and enjoy, but remember, war is hell.