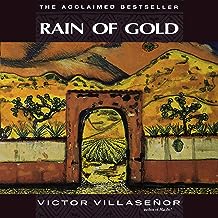 Copyright 1991, 562 pages, including photos, map, family trees, author’s notes and acknowledgments.  Made possible by a grant from the National Endowment for the Arts, a federal agency, and the Texas Commission on the Arts. Publisher Laurel/Dell/Bantam Doubleday. (Go figure that out.)

Here’s a NEW reason to buy a book! A late colleague of ours, Alphonso Corpus, Stockton University Associate Professor of Art, painted the picture used on this paperback edition of the book. We bought a used copy.

This book is the saga of Villasenor’s ancestors. His parents came as children, with their families, to the United States around 1910 to escape the violence of the Mexican Revolution. I quickly realized I know almost nothing about the Mexican Revolution. Wikipedia describes it as triggered by failure of the regime to manage the issue of presidential succession, with agrarian insurrection as an opportunistic reaction to the social unrest. I don’t think Villasenor’s family would agree! The Revolution was presented in Rain of Gold as struggle of the poor against the wealthy. The violence and suffering were immense, which sometimes makes for harsh reading.

This history of two families is packed with energy and love. They were among 200,000 refugees who entered the United States in the course of the conflict (Wikipedia again).

Both of Villasenor’s parents were considered exceptional within their families. His father was the last child of 14. His mother, also a youngest child, was conceived when a meteor strike caused her terrified parents to assume the world was ending. One of his grandmothers was an indigenous child (Yaqai tribe) adopted into a Hispanic family.

Villasenor dedicates his book to his two grandmothers. They and many others in the extended family were powerful storytellers. Villasenor initially thought much of what they said was exaggerated or fanciful, but as he investigated, he realized most of what they recounted was true.

One thread through this account is the evolution of gender roles in a variety of settings, from remote Mexico to the tumultuous border region and into the Prohibition era in the southwestern United States. Now I want to learn more about the impact of Prohibition on American society.

Another thread in this book is the role of religious belief among “marginalized” families.

I certainly recommend this book highly, and suggest you check out Victor Villasenor to learn about his current activities and interests.

Note! A very interesting feature of this used book is the presence of an embossed seal on the front page. The occasional “Ex Libris” sticker is to be expected, but a high-quality seal? It says “Library of Catherine A Brazil – CAB”. Who was this unknown bibliophile? The “usual sources” do not provide any hint. Rest in peace, unknown friend.

I loved this book! We all need to escape sometimes. What better way than to follow a scientist into “the field”, when the field is in Eastern Siberia. And who can resist the idea of research on owls?

This is the story of Jonathan Slaght’s doctoral dissertation. His goal was to learn about Blakeston’s fish owl (Bubo blakestoni) and to use his data to generate a conservation plan to preserve this endangered but little understood species. Who knew there is such a thing as an aquatic owl, one capable of catching a fish twice its own weight? Other Asian species like tigers and bears generate considerably more popular interest.

Getting into “the field” is a big project in itself when you have to travel to a distant continent and then to a remote location with sketchy transportation and hostile weather, and then conduct your daily business in a foreign language (Russian).

In a Facebook Live interview a few days ago, Slaght discussed the issue of language. His research was done with Russians and mostly IN Russian, but he also kept a personal journal in English. What a challenge! Before writing Owls of the Eastern Ice, Slaght translated the travel and adventure classic Across the Ussuri Kray by V Arsenyev (1921), which documents the cultural and natural history of northeast Asia. (Available from Amazon, formerly unavailable in English.)

This book brings an important message to aspiring scientists. Science is not all white lab coats and precision! Slaght didn’t know much about the fish owls when he began his work. He had almost no idea of how to find them, and less information about how to CATCH one! Later, he had to fit them with transmitters and track their movements. I’m amazed at how much he accomplished. Interpreting the data was crucial, and he successfully generated a conservation plan for his target species.

Alongside the science, Slaght presented cultural and personal information about the people he worked among.

I read this book using the Kindle app on my phone. Not optimal when you want to look at a map frequently. I hope my public library acquires a copy soon.

I recommend this book to anyone who loves to travel or spends time enjoying nature. It would make a great gift for anyone in high school or college who likes science but wonders what real scientists do!

We keep listening to the Oxford History of the United States. So much to learn! These books hold my interest. Often I feel I should take notes, but it’s inconvenient in the car. So I remembers bits and pieces…

This volume covered the Reagan years (1981 – 1989), when I ignored a great deal of news due to parenting and related challenges. And so much of what happened wasn’t IN the news. Whew! Reagan and his administration did a great deal that what questionable, unethical or outright illegal. The “Iran-Contra affair” has its own, extensive Wikipedia entry, including a long list of indictments. George H W Bush was tainted, and would probably not have been elected President if he hadn’t lied so convincingly.

What else? Reagan is given credit for “ending the Cold War”. Herring feels the record is somewhat different. Most interesting is the discussion of Reagan’s relationship to Mikhail Gorbachev. Reagan hated nuclear weapons and feared nuclear war. Gorbachev wanted to shift the Soviet Union away from Marxism towards social democracy. Together, they changed the world, sometimes in ways they didn’t expect.

So these long and ponderous looking Oxford History books are, in fact, good listening and good background for understanding these, our very crazy times.

“Archangel” deals with the history of scientific knowledge. (I’m quoting from the description on Amazon.) Characters wrestle with scientific questions and respond to change in their various fields. What’s it like to give up a major scientific model when a better one comes along? Think about evolution. Relativity. BIG concepts, and their importance spills into many aspects of life, including religion. Two stories deal with the intersection of science and war. X-ray imaging saved lives in World War I. Did it make the war longer? Worse? Better? Good writing, but I found the book choppy.

I finally read the title story of the “Ship Fever”collection, a fictionalized account of one aspect of the Irish “potato famine” of 1845 to 1849. To me, this is family history. My Irish grandmother (maiden name Lynch) was born in the United States about a generation after the famine. I regret that I didn’t ask more questions about her parents and what she knew of her family’s experiences.

The famine caused emigration. Many desperate souls left Ireland in illicit “coffin ships”, on which the death rate was about 20% of passengers.

Barrett’s story (novella?) recounts the catastrophic conditions at one Canadian entry port, on an island near Toronto. The protagonist is a young doctor who unwittingly plunges into the maelstrom of dead, dying and suffering immigrants. Eventually he catches the disease and succumbs. The remainder of the narrative follows a young immigrant woman who survived, nursed the doctor and eventually contacted his loved ones in the aftermath.

So… a rough read for me, in the midst of Covid. Consider the issue of “aftermath”. The whole famine covered a period of a few years. The book runs across a few months.

Andrea Barrett is still on my list of authors who merit further attention.