I didn’t finish reading this book, but I have to return it to the Library because there is a “Hold” on it. Good! Someone else is interested in this topic.

It’s difficult to talk about death. Even language becomes a problem. Euphemisms abound. The one I try hardest to avoid is to say that I “lost” someone. No! I didn’t “lose” my mother! She was not misplaced. She DIED, despite good care and strong family support.

It’s easy to be confused and overwhelmed when a loved one is dying. The time to read and plan is NOW, before a crisis hits. Like many self help books, this one begins with the authors’ accounts of their experiences with the topic at hand. Miller survived electrocution, and Berger helped care for her dying father for several years.

Chapter 1 (“Don’t Leave a Mess”) resonates with me and most of my friends. We are trying to get rid of stuff! Sometimes I envy people who have moved every 5 years. Surely they are doing better than I am at downsizing. This book also discusses the psychological messes some of us carry around.

Chapter 13 (“Hospital Hacks”) is for everyone, but especially those with little or no experience with contemporary hospitals. Everything changes rapidly in the medical field.

The authors describe their book as being for

Pretty much all of us, right?

This year, Stockton’s celebration of Constitution Day fell on the actual anniversary of the signing of the United States Constitution in Philadelphia. This being one of my favorite holidays, I attended the plenary lecture which followed a day of activities with guest speaker Joan Biskupic.

Biskupic is a journalist (CNN), lawyer and biographer. Her talk focused on John Roberts, Chief Justice of the Supreme Court. Her biography entitled The Chief: The Life and Turbulent Times of Chief Justice John Roberts was released in March of this year, and already Roberts has served up more surprises, particularly blocking a citizenship question on the US census. His opinion was based not just on the question of whether the agency involved had the right to add a question, but also whether the reasons for making the change were “contrived”.

Biskupic emphasized the importance of the DC Circuit of the US Court of Appeals as a “pipeline” to the Supreme Court.

During his years of private legal practice (1992 to 2003) Roberts argued 39 cases before the Supreme Court.

Roberts is a conservative, placed on the Court in 2005 by GW Bush and, unusually, elevated directly to Chief Justice, rather than serving as Associate Justice first. Some of his opinions reflect his attitude that the Supreme Court is “not a legislature” and many matters must be left to the states.

What interests Biskupic most is judicial PROCESS – the “horse trading” and “sausage making” behind the decisions which often (as in gay marriage) have huge impacts on American life. Much of this is reflected in drafts that are circulated as justices develop their opinions. How does one justice influence another? Justice RBG warns observers “it’s not over ‘til it’s over”. The Supreme Court sometimes surprises even the most sophisticated analysts.

Biskupic says that in her next life, she wants to be an archivist. She loves pouring over documents. I consider this a very valuable contribution to society (and I never met anyone else who shared that aspiration).

I didn’t stay for the entire Q/A session, but it got off to a good start due to excellent moderation. The first question was about whom she interviewed for The Chief. Roberts is a persistent interviewer. She describes Roberts as “inscrutable”. He never permitted recording of their conversations. Other questions directed to Biskupic pertained to “sleeper decisions”, decisions of greatest consequence and “term limits” for the Supreme Court.

Biskupic published three other Supreme Court biographies and additional related books, some coauthored by Elder Witt (C-Span). I’m most interested in Breaking In: The Rise of Sonia Sotomayor and the Politics of Justice (2014). I believe I read Biskupic’s 2006 biography of Sandra Day O’Connor, though my memory is uncertain, and perhaps I read a different author.

This is McCall Smith’s first novel set in Sweden, introducing a new protagonist, detective Ulf Varg. Why Sweden? McCall Smith has so many other irons in the fire! In books like the Number One Ladies Detective Agency series, the reader feels like he knows his territory (as well as his characters) so intimately. You can’t help but love Mma Ramotswe and Botswana. Does McCall Smith really know Sweden equally well? Or has he found a formula he plans to extend to new countries at random?

Indulge me while I ponder the matter of cultural appropriation. Again, why Sweden? Admittedly, McCall Smith’s novels deal with the interior life – the thoughts, feelings, joys and sorrows of his characters. So maybe it doesn’t matter where they are set. But will Swedes find his portrayal of their country sympathetic? Or condescending? Possibly stereotypical? And (getting down to the tiniest detail…) whence came the umlaut (double dot) over the “A” in McCall Smith’s name (see cover above). Sorry, Sir, you can’t just help yourself to an umlaut! That’s linguistic appropriation. Stay in your own lane, as we say in the USA. (This may prove that I have NO sense of humor.)

The plot deals with a series of criminal investigations, and with the interactions between a group of co-workers (and one “outsider”). Also included is Ulf Varg’s psychoanalyst, who conveniently illuminates the disorder afflicting a person targeted in one investigation, clinical lycanthropy. In other words, the overwhelming that delusion that one is, in fact, a werewolf. Clinical lycanthropy is NOT a crime.

I enjoyed the end  of this book (when a romance emerges) more than the beginning, so perhaps I will continue to read about Detective Varg. He and the other characters may grow on me.

Karl (not his real name) was my friend from 1975 until he died in 1997. He was a retired Professor of Physics and an avid tinkerer, installing solar hot water on his house in 1976! We were neighbors, and in lived in identical tract houses. Whenever something went wrong at my house (plumbing, or birds nesting in the dryer outlet), I called Karl and he told me how to fix it.

Karl and his wife moved away in 1987, but we kept in touch. Karl was diagnosed with Parkinson’s disease around 1990. It was treated with some success, but inevitably, over time, it progressed. Karl hated dropping things, and stumbling. He detested the idea of losing his independence and wanted control of his fate.

In January of 1997, Karl shot himself in the head. This action was carefully and thoughtfully planned, though not explicitly announced in advance. He made sure his wife was not alone when his body was found.

Karl died alone, and he died by violence. These two circumstances were in total contradiction to his life and values. Karl was sociable and extensively connected to family and friends, and certainly he was never violent. What a shame that he had no better choice. What a shame that my memory of him is darkened by the grim thought that at least he got it right on the first try.

Please, listen to that again.  At least he got it right on the first try. Something is profoundly wrong when this is the best that a dying person can hope for.

I doubt that New Jersey’s new (and still controversial) Aid in Dying law would have helped Karl. Would any doctor attempt to project the life span of a person suffering from Parkinson’s disease? Possibly not. But, as medical science continues to prolong life, we need to consider and reconsider how best to support human dignity and autonomy at the end of life.

To brighten my dear friend’s memory, a cheerful anecdote: One day I spotted Karl in the restaurant next to the local Post Office, drinking coffee. I didn’t have time to stop for a cup, but I dashed in. “Karl, let me smell your coffee!” I inhaled deeply over his cup – wonderful! We exchanged 30 seconds of news and I rushed off. Unfortunately, I was recognized by somebody as “that lady from the Health Department” and a rumor started that there was something wrong with the water, or the coffee, or the restaurant! I had to reassure anxious neighbors that no health department ever evaluated drinking water (or coffee) by smelling it. 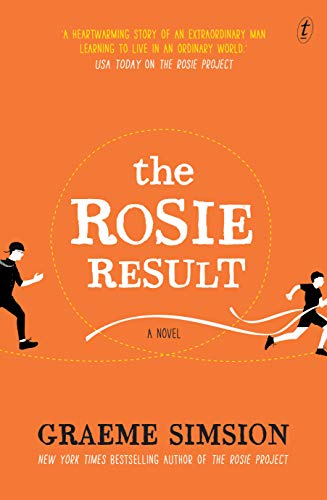 This is the third (presumably the last?) of the “Rosie novels” by Graeme Simsion. The book is dedicated to “the autism community” and the protagonist is Don Tillman, genius genetics researcher and presumed “man with autism.”

Don Tillman considers himself the happiest man alive, but it took him long years of hard work to reach that pinnacle. He has satisfying and important work, a wife (Rosie) he adores and an eccentric ten-year-old son named Hudson. Circumstances surrounding his son’s education and his own experiences with armed authorities force Tillman into the shocking realization that if his possibly autistic son doesn’t acquire a good deal of “conventional” social saavy, he could blunder into situations that would be dangerous or fatal. Hudson must learn to navigate the world of the “neurotypicals”, whether or not it is rational.

Tillman shifts into problem solving mode, arranging to spend more time with Hudson and generating lists of needed skills, like how to throw a ball and dress like his peers. Hudson, in the meantime, comes up with a few projects of his own, like overcoming his fear of water and becoming a competitive swimmer.

This book takes on all kinds of “disability” related issues. One is semantics – how do you speak of a person who is autistic? What’s good and bad about having a “diagnosis”? What treatment is helpful or desirable? What “accommodations” should be made in school?

All of this is handled in a breezy style. I couldn’t stop reading, and I was cheering for Hudson (and his parents) all the way.