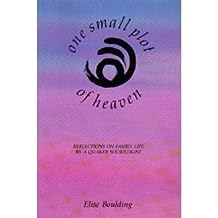 Pendle Hill Publications, 1989, 216 pages plus bibliography and index. Why did I pull this old book off my shelf? Just looking for comfort, in these difficult times, and remembering Elise Boulding’s husband Kenneth from a lecture many years ago.

This book is a collection of twelve separate speeches and pamphlets. It’s far from coherent, but I’m glad these essays were assembled in one place, for our benefit. I read Born Remembering (third chapter) many years ago with a discussion group.

This time my attention was drawn to two chapters written THIRTY-FOUR YEARS apart, in 1952 and 1989. The essay from 1952 was entitled Friends Testimonies in the Home. My reaction to it was that Elise Boulding set an impossibly high standard for home making and child rearing! I mean, totally out of sight. On a scale of one to ten, my parenting (~1984 to 2010) would have rated about 0.3. When she wrote this essay, three of her five children had been born. Wikipedia describes her as “home maker and activist”. She lived in proximity to other Quaker families and attended a large meeting that provided substantial attention and support to families. A major focus was on how to raise children who would become peacemakers. Motivation, I think, sprang from post WWII international considerations and Cold War fears.

Thirty-four years later, Elise Boulding was looking at a very different world, and her focus was not on international considerations like war but on her beloved Religious Society of Friends. Quakers had recognized some of their failings, including the occurrence of  violence in Quaker families. How could she have missed this, she asks? She admits to “willful blindness” and describes the “strong effort of the will” it took for her to confront the ugly truth. Then she proceeds to offer analysis based on both Quakerism and sociology.

Boulding identifies and describes what she calls a “residue of emotional turbulence” and “the unacknowledged residue of anger” among Quakers. Yes.

The perfect Quaker family is a “fictive reality” (Boulding’s term).

This is an oversimplification. But I know from personal experience that trying to create the “perfect Quaker family” (or marriage, or persona) can lead to trouble.

The essay and the book end with hopefulness. More hopefulness than I can sometimes muster. Guess I better keep the book around, to help me through dark moments.

Amazon is having time trouble – you know, publishing reviews of a book before its publication date… Somebody better call the Chronopolice (Literary reference! Get it?) But, hey, Amazon is supposedly remaking America. So what if they mess with time?

The three reviews published by Amazon award Gulley one, three and five stars. The jury is still out.

The first two thirds of this book constitute a memoir. Gulley’s personal history is interesting, but bashing the churches of his childhood is small minded. Humor should be used very gently in such writing. Every author should have a “humor editor”, to help achieve desired tone and balance.

I liked the later part of the book better, when Gully wrestles with contemporary issues and discusses the role of change in spiritual life. Can you change your mind about an issue and remain faithful to your spiritual tradition?

So how did I acquire this book? It arrived unsolicited in the mailbox at my Quaker meeting. The publisher seems to have been unaware that there are several kinds of Quakers. Gulley is a pastor and has spent his adult life in paid employment with a Quaker congregation. My kind of Quaker, generally referred to as “unprogrammed”, does not ordain pastors or employ paid spiritual leadership. Nonetheless, we decided to look at Gulley’s book in our discussion group. His informal and lively approach worked well for us and supported several good sessions, so I recommend it to anyone interested in the role of faith in contemporary life.  But it’s far from the “whole story” when it comes to Quakerism!

I set a personal record over the Christmas holiday – I participated in “religious” events at six different locations during a two week period! (I didn’t plan this.)

The Saturday before Christmas was the winter solstice, the shortest day of the year. A friend organized an event based on the labyrinth, a tool for walking prayer/meditation from the Christian traditions of Europe. Our labyrinth was outlined with CANDLES. This was a first time, seat of the pants, open-to-the-public event. I helped with the set up, in a field next to the local volunteer fire hall. The organizer picked a spot and started to lay out the labyrinth pattern with cord. We helpers opened white paper bags, put in sand and tea lights (votive candles). The afternoon was breezy, and we worried that a strong gust of wind could disrupt the whole project. By 5 pm we had done what we could (assembled over 500 luminaria!) and scattered for dinner. When we returned, the wind had dropped, it was still warm for December, and the candles were being lighted. I was the first to step into the labyrinth, and I wondered what would happen if I made a mistake and led the whole line astray… But the candlelight was bright enough for me to see the cord on the ground. When I reached the center and started back out, I relaxed. Friends and neighbors were walking quietly, happily… We had been encouraged to concentrate on renewal and transformation. Celtic music added to the atmosphere. Emerging, I stood and absorbed the sheer beauty of what had been created. The candles flickered warmly. The labyrinth was a circle of light in a dark, quiet night. I was reminded of campfires I have enjoyed, but the candles cast a much gentler light. I could look up and enjoy the stars. For an event that only been very casually advertised, a good number of people came, maybe 75. And many more said they wished they had known about it, or that it had fit their schedules.

The next day, the Sunday before Christmas, I was in my usual place, at the small Quaker meeting I have attended for many years. Our worship is unprogrammed and based on silence. Nobody has to create an Order of Service or write a sermon. I always enter feeling expectant, because I don’t know who may speak or what subject may arise. We have our “customs”…

Yes, people did speak. No, I’m not going to tell you what they said. After worship, we shared a potluck brunch. That’s as close as we came to a Christmas party this year. Simplicity.

Then I hit the road, fetching up in Boston in the company of family. On Christmas Eve, I wanted music, and the rest of my family was ready for food and TV or games. They walked me to Arlington Street Unitarian Universalist Church near Boston’s Public Garden, then left on the T (subway). The Church wasn’t open yet, so I strolled the upscale neighborhood, encountering the homeless as well as well as the wealthy.

Half an hour later, I settled into a box pew at the Arlington Street church, holding an unlighted candle. I grew up a Unitarian Universalist. Arlington Street, like the church of my childhood, is a relatively formal place. The service I attended was listed as a “family” event, and the families were there. So was a live lamb! The children were delighted. The service consisted of familiar readings and familiar music. The candles were lighted starting from the front of the church, and the lights were dimmed as the candlelight spread. We sang Silent Night in the darkened sanctuary. It was as magical as the evening services I remember from my childhood. As I left, the grandmother who had sat behind me apologized for her grandchildren’s “noisiness”, but I assured her I enjoyed their presence. They were much too cute to be a nuisance.

Next I went to an even bigger, cathedral sized church, Emmanuel Episcopal Church, two blocks away. Again I was pleasantly greeted and provided with an Order of Service, which looked really long and included Communion, open to all. We sang and read our way through the Christmas story. There were a few unfamiliar hymns – which surprised me, since I sang in choirs for years and know the Protestant hymnology well! We stood for every single hymn. The program said “stand as you are able” and I thinking about staying seated as my knees accelerated their protests. The officiants sometimes chanted, and there was a “gospeller” who sang and chanted from the Bible. Then came the special event that caused me to pick this church over other options – Bach! This church has a resident instrumental ensemble and a professional choir. The music, performed in setting not significantly different from the churches Bach wrote for, was ethereal, glorious, sweet beyond words. I closed my eyes and thought about angels.

When I left the Episcopal church, I considered returning to Arlington Street, which offered TWO more services featuring the Boston Gay Men’s Choir, a group with an excellent musical reputation. However, my family was keeping dinner warm for me, so I jumped on the T and headed for Allston. I had enough music in my head to satisfy my Christmas cravings.

Another Sunday came around… I was in Connecticut with my sister and her husband. They have two church affiliations, and we settled on “his”, a small Lutheran church in Hartford. Attendance seemed light, but the Pastor smiled and assured us that the turnout was excellent, as the preceding year’s Sunday-after-Christmas service had been attended by only eleven people! I looked around. There were at least 22 of us there, maybe even 33. I felt welcome and important. Our singing sounded strong for our numbers. The lay readers were teenagers. Usually coffee follows the service, but someone forgot. No coffee. As a member of a tiny congregation, I feel sympathy with this kind of screw up. Besides, Grace Lutheran has an astonishing record for feeding people. They serve dinner every Friday night to ANYONE WHO WALKS IN THE DOOR. The neighborhood is mixed. Some people are hungry. Some are lonely. Church members join in. When I visited a year ago, 25 or 30 people turned up. Many were “regulars”. The food was great.

And my sixth experience? This morning (as on most Saturdays) I went to yoga class at my local Hindu Temple. Because of the severe cold, we practiced, not upstairs in the usual drafty space, but downstairs in the sanctuary. This room, which might be 10% of the Temple, houses the gods. There are about 15 of them, of varying sizes, dressed in glorious colorful fabrics. Since my last visit to the sanctuary, the names of the gods have been posted. I practiced in front of Mma Sarasvatri. I used to think of the gods as “images”, but I’ve gradually learned they mean something more to the worshippers. Each god is a channel. When you look at a god, he or she LOOKS AT YOU. It’s a relationship. The sanctuary (in addition to being well heated) is a lovely place to practice yoga. A mantra runs on a continuous tape. Listening carefully, I think I was hearing 10 syllables, but I don’t know what it means. The room smells faintly of incense. Temple members come and go, performing their devotions. I relax, and leave feeling as if I have been on a vacation. I go to a distant country without buying an airline ticket. Thank you, Vaikunth Hindu Jain Temple, for making us welcome!

So,,, tomorrow I will be back at Quaker meeting, with music and ceremonies in my head. I will think about the people I visited, and wish them well.