My corner of the internet is busy debating the impact of “active shooter” drills and other safety measures on the mental health of children. One author asked if any other generation of American children has known so much fear. Symptoms of anxiety are becoming widespread.

I remember my fear of The Bomb. I was born in 1949. By the time I was in elementary school, the Cold War was in full swing. The arms race was hot. By age 8, I participated in “flash drills”. I was taught to “duck and cover”, but it wasn’t at all clear what that meant. Protect the back of my neck? When the local emergency siren sounded it’s weekly test (noon on Saturday), I flopped down with my face in the grass with my arms protecting my head. I wasn’t frightened.

Things gradually ramped up. I lived near Hartford, Connecticut, and I was told Hartford was probably a nuclear target because of an aircraft factory (Pratt and Whitney). I knew that bombs were delivered by airplanes, so the air traffic in and out of Hartford’s Bradley Field and along the northeast corridor frightened me. Then I was told that the planes that delivered bombs were up so high that we wouldn’t hear them. This didn’t exactly help. I was afraid of invisible radiation.

Things came to a head one day. My mother was cooking dinner using the pressure cooker. (Nothing like having a bomb in your kitchen.) The valve got blocked. Fortunately there was a safety valve, which popped loose. The escaping steam made a loud, horrible, screeching, completely unfamiliar metal-on-metal sound. Assuming we had been bombed, I panicked and headed for the basement at a dead run. My mother intercepted me, explained the problem in the kitchen and helped me settle down. I’m lucky. No one mocked me. I’ve shared this as a funny story from my childhood. But it wasn’t funny.

We lived with fear. My parents, survivors of the Depression and World War II, didn’t tell us everything was going to be okay.

How did I “get over” my fear? I learned denial! Hey, we all use it. If we really thought about all the things that can go wrong in life, none of us would get out of bed. Surely we wouldn’t get into automobiles or airplanes. Not today, we tell ourselves. Not in my town. Not me. I first utilized denial the summer I was eleven. I was going to Girl Scout camp for two weeks. It’s hard to explain how happy and excited I was! And I thought “The Russians won’t drop the bomb while I’m at camp.” So I forgot about it, set it aside, and went off to spend two weeks in a tent. It was great. What’s wrong with denial, if it makes it possible to live with something you can’t change?  I knew perfectly well nothing had actually changed between the US and Russia.

I remember the controversy, when I was in high school, over gory auto accident movies. My high school offered Driver’s Education. Some movies went to extremes – showing decapitation, etc. Some teachers insisted everyone had to watch all the blood and guts. Other teachers allowed some students to be excused. I don’t remember the details. I wonder what is current practice. I do know there’s some educational research that may help those who make these decisions. Does putting a wrecked car in which a young person died in front of the high school reduce that chance of prom night tragedies? I wish I knew.

Here’s another experience I want to share, from the perspective not of a child but of a parent. The threat in question was train safety. Amtrak, understandably, wants to keep people (especially children) OFF THE TRACKS. One of their approaches (early 1990s) was to show a safety movie, and one target captive audience was children in schools near train tracks, most of which are not fenced. (Never mind that NO child in our town crossed a track to walk to school.) My son was traumatized. The movie was very upsetting. As a substitute teacher, I had the opportunity to see the film, and, yes, it was shocking. After some general safety discussion (don’t walk on the tracks, look both ways if you must cross), the film showed two children on the tracks. One has boasted that he will stand on the tracks until the train “almost” hits him. Another child tries to pull him off. With a roar and screaming whistle, the train thunders toward them and the screen goes black. I’ll bet my son wasn’t the only child to get upset.

A school shooting is a different type of threat. Parents and teachers are straining themselves to the utmost figuring out how to help and protect today’s children.

So much to consider… children need to learn train safety, fire safety, pedestrian safety, and now, some things about firearms. Our responsibility as adults is to protect children and, over time, teach them to protect themselves. It’s not easy.

We all experience fear. Parents and educators face incredibly difficult decisions. We need to talk.

I didn’t pick this campground! Flood plain location, built on dredge spoil, near two rail lines AND under a turnpike bridge. Really, who decided to put a state park here? Just as well I didn’t know all of that in advance.

Schodak Island State Park turned out to be great! For starters, it’s close to the mighty Hudson River, so beautiful and historic. The State Park is relatively new, so the bathhouses are nicer than anything I saw in other New York state park campgrounds. The bathhouses were helpfully marked “shelter here in case of inclement weather”. I’ve experienced enough “inclement weather” in my camping trips to be very grateful for clear advice.

After flush toilets and hot showers, what makes a good campground? At Schodak Island, the campsites have been improved with a layer of sand, so securing tent stakes is easy. The camping area is blessed with tall trees and wildflowers. With only 66 sites, the campground felt cozy.

The highway and train bridges near the site are very, very high. I never heard the highway traffic. I heard the train engines moving past, but only once in three days did I hear a shrill whistle.

Management and staffing are important. At this state park, facilities were clean and functional. Our main contact was a friendly campground host, who not only answered questions but also delivered wood and ice for a nominal sum, whenever we wanted it. Delivering wood is smart management, as scavenging by campers can be destructive. The ice delivery was a GREAT luxury in a campground that’s relatively isolated. If there was a convenience store within 5 miles, I didn’t spot it.

So how did we spend our time in the woods? The usual… eat and talk… talk and eat. Plenty of casual hiking and bird watching. Bicycling for the more ambitious. 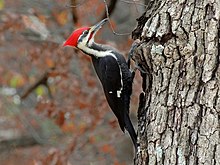 A little north of the State Park, I saw my first pileated woodpecker! (Photo from Wikipedia. I was in a moving car…)

Some of us are diehard public transit enthusiasts, and Schodak Island is, in fact, quite readily accessible, by (you guessed it) TRAIN. There’s a station about 20 minutes to the north (Albany Rensselaer) and another a little further south (Hudson). Three campers took advantage of this.

So I take back some of what I’ve said about New York state campgrounds in the past. (It wasn’t nice.) I’ll be happy to return in the future.

PS! Almost forgot something very nice! We found a shelf of books on the outside of the bathhouse – a “free library”, so if it rains and you forgot to bring something to read, there it is! The reaction of most of our group was “I should have brought some books”.