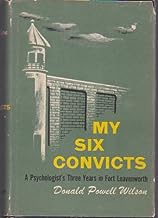 This is another book I remember from my early teen years. It has a subtitle: A Psychologist’s Three Years in Fort Leavenworth. I remember very little… I learned of the brutality of the criminal justice system. And one of the convicts was able to enter a trance and cause the symbols of the zodiac to appear on his body. What do you suppose THAT was about??

Donald Powell Wilson is easy to track thanks to Kirkus Reviews, which explains how Wilson came to work at Leavenworth and his relationship to the six prisoners of the title. Wilson was doing narcotics research for the US Public Health Service. The prisoners served as his assistants. The unnamed Kirkus reviewer describes the book as “…dramatic, exciting, frequently moving…”

And then … there’s the movie! Film noir, according to Wikipedia. It’s described as being “true to the spirit of the book”, but with comedic and dramatic elements added.

Strange that two of the earliest books I remember reading were made into films!