This is another of the books I grabbed on my last pre-Corona visit to the public library, and one of the last that I read.

This is the third book I’ve read about the American military in the past six months. I didn’t plan this! See All Hell Breaking Loose (about climate change) and Inside the Five-sided Box (about Secretary of Defense Ashe Carter, immediate predecessor of Mattis).

Secretary of Defense James Mattis was appointed by President Trump on Inauguration Day in 2017. He disliked the nickname “Mad Dog” Mattis, used by Trump and some members of the media. 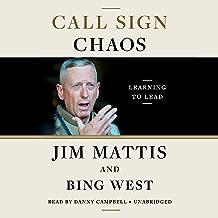 After his resignation at the end of 2018, Secretary Mattis (with coauthor Bing West) wrote his memoir Call Sign Chaos: Learning to Lead. It was published in September of 2019. Snodgrass’s memoir about speechwriting for Mattis Holding the Line was delayed by Pentagon censorship until just AFTER Mattis’s book was released.  Holding the Line contained no classified material, but Snodgrass had to sue to publish his book. (Wikipedia)

All of this I learned AFTER reading Holding the Line. I’m pleased to report that Mattis’s book is also available at my library, which is closed due to the pandemic. It’s worth having (at least) two views of the Trump/Pentagon relationship through difficult times.

Holding the Line doesn’t really explain why Mattis accepted Trump’s offer to be Secretary of Defense. Mattis had retired from the Marine Corps as a four star general in 2013. When he interviewed with Trump in November of 2016, he found that he and the President elect disagreed on most matters of policy, including the use of torture, specifically waterboarding. Equally substantive, Mattis and Trump disagreed profoundly on the role of military allies in maintaining US security. Mattis felt that “America First” shouldn’t mean “America Alone”. Mattis was quoted as saying “The country that fights without allies, loses.”

Snodgrass, a Navy aviator, came to work with Mattis as his speechwriter and eventual Communications Director. In terms of age, they were a full generation apart; by military status they were separated by five ranks. Snodgrass had previous experience as a Pentagon speechwriter for an Admiral. His most notable accomplishment was the 2014 authorship of a study on retention of naval officers, a major concern of the military since around 2008.

Why a speechwriter? The Secretary of Defense oversees the vast American military, enacting the policies of the Commander in Chief, aka POTUS. Every move he makes, every word he speaks, carries weight and is intensely scrutinized not just in the US but around the world. NOTHING goes unscripted.

Mattis intended that his public statements be entirely aligned with Trump’s positions. Would he have accepted the job, if he had known how often important policy issues would be announced by Twitter? Snodgrass worked exhaustively to keep up with White House policies, but the occasional surprise made Mattis’s office a tense and difficult workplace.

During the early Trump administration, Mattis was part of the small group that Washington insiders sometimes called “the adults in the room”. The “adults” expected and intended to prevent some of President Trump’s apparently impulsive schemes from being implemented. Four other men fell into this category. They occupied the positions of

By March of 2018, Trump has dismissed each of these appointees. Mattis was the “last adult standing”.

It’s not clear to me why Mattis held on through 2018. He resigned after Trump announced unilateral withdrawal of the US military from Syria, against Mattis’s advice. Trump tried to claim Mattis had “retired”, but his resignation letter makes his position perfectly clear. He disagreed with the Syria pullout.

One thing this book makes very clear is the incredible mystique that surrounds the Presidency. (I’m pretty sure it is NOT what America’s founding fathers intended.) Even very intelligent and level headed leaders (like Mattis) act awed by the office, even when they are critical of the office holder.

The New Yorker magazine just published (April 27) a 14-page article entitled “Abandoned: America’s Syrian allies suffer after the US withdrawal”. One big problem was communication. In the absence of clear information, American military officers had provided reassurance to their counterparts, not themselves believing that Trump would side with Turkey against the Kurds. The article makes evident the extreme complexity of Syrian civil war and the ambiguousness of American involvement. Trump had promised to disentangle the US from the Middle East, without a plan, other than the intention to eliminate the ISIS caliphate. (The author of the article, Luke Mogelson, writes for the New York Times and won an award from the Pulitzer Center for Crisis Reporting. Watch for his work.) I recommend this article.

Much to think about, especially now, as we face a crisis of incredible magnitude in a totally different arena, international public health.