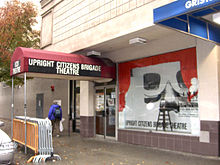 Comedy comes in many flavors. My Chicago based comedian son practices “stand up”, which is solo comedy performance. Improvisation (a team effort) ranks very high among aficionados!

The Upright Citizens Brigade was/is a “laugh factory” in the grand tradition of Second City and Comedy Central. The UCB “brand” grew to include a comedy performance group, theaters (in NYC and Los Angeles), a school, a television series, movies and a book, The Upright Citizens Brigade Comedy Improvisation Manual. It was the closing of the theatres, on March 12 in the face of the pandemic, that inspired this wistful New Yorker article.

UCB provided training and community to many aspiring comedians and produced some highly successful performers.  Amy Poehler, one of the original UCB partners, said

“We all think we’re in control of our lives, and that the ground is solid beneath our feet, but we are so wrong. Improvising reminds you of that over and over again.”

In 2016, author/editor Emma Allen took an eight week introductory course at UCB and wrote about it, also in The New Yorker (Sept 5, 2016). The title was “You had to be there”. UCB has been described as resembling a cult or twelve-step program or even a pyramid scheme. Initially uncomfortable and embarrassed, Allen ended up enjoying her classmates and their activities. She said it was like going to summer camp, but you didn’t have to sleep in the same room with your buddies.

Her final comment, “I felt that the class had made me a more careful listener, and that I recovered better after doing something embarrassing in public, like falling on an icy sidewalk.”

I enjoyed these articles so much I looked up Emma Allen and learned that (at the young age of 30) she is the cartoon and humor editor of The New Yorker! On a site called The Gentlewoman’s Club, I found this from an interview:

Q: What’s it like to have a job in the humour business during perhaps the least funny moment in modern American history?

Emma Allen: Well, first, you have to satirise power in order to chip away at it, and we’ve never had greater goons in charge, so you can either hide under the covers and despair or go after them with the funniest and most scathing lines you’ve got. And then, when every single second seems to bring even more depressing news, humour is a great source of relief.

This was written well before our present calamitous situation. Long live humor! The Upright Citizen’s Brigade will survive. Comedy is making a comeback!

Rumor reached me that a club in Kansas City plans to open TONIGHT. Activity will be scaled down. It’s an experiment. But live comedians will perform in front of a live audience! Good news!