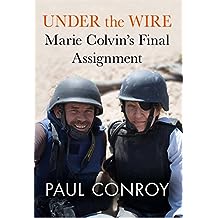 Journalist Marie Colvin (1956-2012) was an American war correspondent who reported on some of the most violent conflicts of our times – in Chechnya, Kosovo, Sierra Leone, Zimbabwe, Sri Lanka, East Timor and Libya. By the time she reported on the Syrian Civil War with photographer Paul Conroy, she had achieved iconic status. Blinded in one eye by a grenade in 2001 in Sri Lanka, she wore an eye patch and had a reputation for courage and fierce, incredible persistence. Her story has been told in books and a movie.

Conroy’s account of the Syrian Civil War (from the rebel viewpoint) is hard to read. The statement “war is hell” hardly begins to describe the conditions and suffering Colvin and Conroy saw and ultimately experienced. They escaped from the besieged rebel city of Baba Amr, but returned at Colvin’s insistence. She and a French photographer died there. Conroy escaped a second time, with terrible injuries and severe PTSD.

For another look at this book, see this blog entry. The author highlights important aspects of the narrative that I won’t attempt to cover.

Why do journalists do expose themselves to such nightmarish danger? Their answer is simple. They do it to bear witness, to see and to tell the terrible story of human suffering and in particular the suffering of non-combatants and the innocent – children in particular. Throughout Conroy’s book runs outrage and the frantic hope that someone is listening, that someone will intervene on behalf of 28,000 civilians trapped in Baba Amr.

Less idealistically, war zone journalists are adrenaline freaks, hooked on the chemistry of fear and often on other chemicals as well – alcohol, nicotine, etc. But where would we be without adrenaline freaks? Who would rush into burning buildings or fly into space? I don’t “understand” this behavior, but I respect it.

In this blog, dated October 9, 2013, you will find my review of Nicholson Baker’s Human Smoke – The Beginnings of World War II, the End of Civilization. Why does Baker choose that date as the end of civilization? Because it marked the end of a distinction between soldiers and civilians during war. He blames the change on the emergence of aerial bombardment as a primary military tactic.

The climax was the American destruction of Hiroshima and Nagasaki. This action was NOT unanimously approved by American citizens.

The Syrian Civil War may be (almost) over, but peace is not assured and any form of “reconciliation” seems remote. The magnitude of human suffering is staggering.

If civilization ended in 1945, what has been going on since then? Civil wars seem more and more common. “Guerrilla” war is a new norm. Wars are no longer declared, and are not fought by countries, but often by “non-state entities”. There’s a great deal of “proxy” behavior. Superpowers are competing for influence and access to resources. The invention, production and distribution of weaponry has become a large and permanent feature of the global economy. What else? I’m not educated enough to take this analysis further.