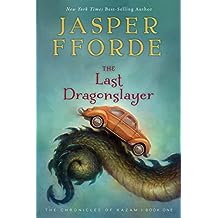 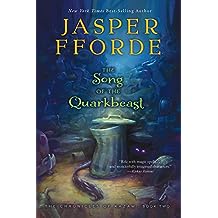 We all need to read something silly now and then! This is some of the best silliness available.

These two books are part of Jasper Fforde’s Chronicles of Kazam. They are listed as “for young readers” and have received awards as such, but the Library doesn’t have them marked as YA (Young Adult). Who cares? I love a good dose of fantasy now and then.

The setting of these stories is vaguely dystopic – a future Britain in which magic happens, but VERY unpredictably. The fifteen year old protagonist is a foundling, an orphaned child working out a period of indenture to pay for her Spartan but survivable upbringing in the vaguely demented convent of an unspecified religion.

In a way, our heroine’s life is what many teenagers would want – REAL work and responsibility mixed with challenge and adventure, and accompanied by friends.

I knew I was going to like these books when our heroine announced that she’d had a driver’s license since age 13, because the driving test was based on maturity, not age! Wouldn’t THAT be a nice innovation??

Anyway, when you need something to read in the doctor’s waiting room or on a train, check out Jasper Fforde. He’s also written The Thursday Next Series for adults, which takes place in The Bookworld and involves lots of time travel.