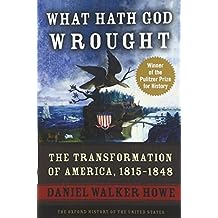 1 thought on ““What Hath God Wrought: The Transformation of America, 1815 – 1848” by Daniel W Howe, part of “The Oxford History of the United States””