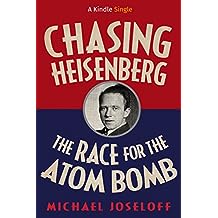 This book appeals to two audiences:

I studied chemistry, so I’m familiar with the Heisenberg uncertainty principle, published in 1927. When dealing with subatomic particles, you can’t know both the location and the wavelength. (I think that’s it.) I even studied quantum mechanics. Heavy going… Heisenberg’s research contributed to the “atomic age” in which we live.

Theoretical physics might have remained an obscure scientific obsession, but as World War II proceeded, it became a vital matter of Allied security to find out if Hitler might deploy an atomic weapon. Heisenberg, a loyal German, was at the head of the German atomic effort. Hence, the Alsos Mission, a military attempt to capture certain German scientists (before the Russians) and learn how far their research had progressed.

Equally interesting were descriptions of the Manhattan Project (America’s first nuclear reactor) and Los Alamos (where our nuclear weapons were developed.)

This narration reminds us that, when it was happening, the outcome of World War II seemed uncertain.