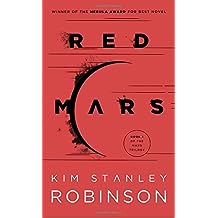 This is the third book by KS Robinson that I’ve reviewed here in my blog. The other entries are dated

I originally dived into Robinson’s work because I wondered what a science fiction writer had to say about climate change.

Robinson does not hesitate to tell a BIG story! Red Mars covers an impressive amount of time and space. There are 100 people in the party dispatched to colonize Mars, and it’s hard to keep track.

After a long, slow build-up, the plot caught me up and I couldn’t stop reading.

Robinson postulates an amazing amount of technology, much of which is extremely (improbably?) sophisticated. He also assumes havoc on earth – overpopulation, takeover by multinationals, etc. The most disruptive technology he posits is a technique for individual rejuvenation, to restore to a person the immune system and ability to heal of a ten year old. This would add an unknown numbers of decades to life. On earth, score one more for Malthus…

As in New York 2140, Red Mars is told in two voices. One is an omniscient narrator and the other a “commentator”. It’s a weak device. Isn’t it an author’s job to construct a coherent narrative? The parallel structure works better in New York 2140, published more than 30 years later. Robinson improved greatly over those decades.

My problem with Red Mars is its length. Robinson includes way too much descriptive cogitation. A good editor might have helped him to tell the tale in half the number of pages.

Making comparisons with The Martian by Andy Weir is impossible to resist. The Martian is short and crisp. The author didn’t really set out to write a novel! His chatty, un-selfconscious prose is refreshing. His main character, Mark Watney, could have been the student next to me in college math or physics. No one in Red Mars was as clearly drawn.

So I won’t move on to Green Mars (the second of the Mars trilogy) any time soon. Too much going on in my life, too many other good books to read. If I become sick or disabled or have to drive to Tucson, I’m sure I will enjoy the rest of the Mars trilogy.